An eBay seller recently listed a MiSTer RAM module and many people felt the title and description was misleading.  First, the seller listed a 32MB (256MBIT) RAM module as “256mb”.  While technically, that’s the truth (and depending what field of work you’re in, you might call it the ‘right’ way to describe it), people in the MiSTer community generally refer to those modules as “32MB” modules.  Next, the title and description listed “Neo Geo”, which is false, as the upcoming Neo Geo core would not be fully compatible (if at all) with this module.

To add to the confusion, this listing appeared at a time where MiSTer enthusiasts are eagerly awaiting 128MB models to be released, so it’s easy to envision non-technical people seeing “256” and thinking it’s a “larger” RAM module.

It’s also easy to come to the conclusion that this was an intentional misleading;  Companies have long used techniques like this, hoping that customers see the higher number, thinking that they are getting more for their dollar: 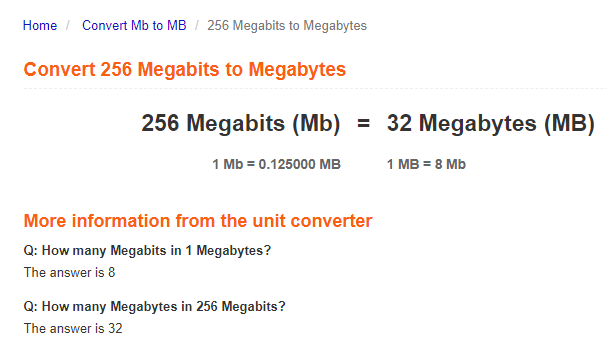 One megabit does not equal One Megabyte.  Easier way to remember is that you generally want the version that has both letters capitalized, or you can use a converter like the one that’s linked above.

Another option is to divide by eight to give you an estimate: 256/8=32 for those of you who enjoy math. I do not.

For anyone that is new to the MiSTer project, there is a thread on the Atari-Forum with reputable sellers aptly named “Local Sellers for MiSTer Expansion Boards”.

If you’re looking to buy this memory for the work-in-progress Neo-Geo core, I advise for you to wait for larger capacity modules since 32MB isn’t enough for a significant portion of games. This could cause games to be glitchy, incomplete, or to simply not load at all.

As always, buyer beware, but it’s also up to all of us to police our own community.

This article seems to have generated a lot of hostility.  I’ll admit the original post may have been worded a bit too harshly depending on your point of view, but unfortunately, the seller in question has chosen to harass multiple RetroRGB writers across multiple platforms, as well as threaten legal action for allegedly slandering his eBay store.

Both Ray and myself have asked the eBay seller to update the post with “(32MB)” in the title.  While that probably should have been done before the article was posted, the fact is (at the time or writing this), the seller added “32MB” to the description, but he both refuses to change the title and continues to harass and threaten.

I’ve asked Ray to edit this post to remove direct links to the seller, as well as remove any accusations of intentional misleading.  We will NOT be removing the post though, as beginner fans of the MiSTer might appreciate the Megabit vs Megabyte clarification, as well as the warning against hostile and potentially misleading sellers.

I’d like to remind everyone that all of our writers are human and will sometimes make mistakes as we all do; I’ve personally made more than everyone else on our team combined.  If you feel we’ve misrepresented you, contact us and have a conversation.  History proves that all of us, regardless of our opinions, will always respond professionally to respectful criticism.

The seller has finally updated his listing to remove “Neo Geo” and add “32MB”, but has continued to harass and threaten the RetroRGB team.  From a technical standpoint, the 32MB RAM modules seem to be well-made and the price is good…but before buying, ask yourself if you’d like to give your home address and personal information to someone who harasses and threatens when things don’t go their way.