Jenovi’s Retro Impressions just posted a video highlighting three games that were never released, but eventually leaked to the public.  The first game, Penn and Teller’s Smoke and Mirror’s is a SegaCD game many of us have already been able to try.  There’s a Steven Seagal game I’d never seen before (and was glad I didn’t)…but the most amusing to me was a game called Jim Powers that was supposed to be completed and released by Piko Interactive back in 2014.

The timing of this video was ironic, as Piko’s made some noise for themselves in the past week, when their nonsensical responses to criticism of the their cartridge quality infected Twitter (LMAO @ ‘hoax’): 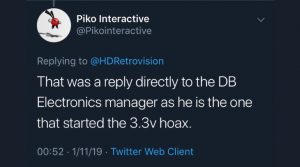 It’s always sad to people act unprofessionally* towards anyone who disagrees with their opinion, regardless of facts, proof, or even pictures of their work.  Their antics continued over to Jenovi’s video as well, claiming that the reason for the Jim Powers delay was that the original creator passed away in 2016: 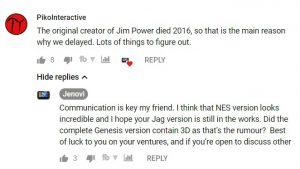 Jenovi, classy as always, took the high road, but I (Bob**) will not.  How can the death of the creator two years after the announced the release of the game effect anything***?  Either way, you don’t need a calculator to see that there’s two years between the creator’s passing and the promised release date, so it seems to me there’s some disingenuous behavior going on.

Jenovi attempted to reach Piko for an interview and I also reached out to them back in 2016 myself;  I’d always felt** the company had an air of suspicion around them and was hoping someone from their staff would help put us at ease.  I received a few responses from someone named Eli, who kept delaying the interview, before he stopped responding altogether.

Well, enjoy Jenovi’s video and whatever state the leaked Jim Powers game is currently in, as the “finished” version is clearly vaporware.  Oh and I’ll go ahead and add Piko Interactive to my list of companies who harass their customers and should be blocked on all social media accounts.  They are currently only one of four.  I’m proud to have never given them a single penny of my money.

*Per the request of Piko Interactive, I changed my wording from “harrassing” to “unprofessionally”.  Because they took the time to email me regarding that, but not the build quality of their cartridges, the unreleased game’s status, or the fact that they referred to a technical article as a hoax.  Seriously.

**As this website grows, there were be many more writers, each with their own styles and opinions.  If you disagree or are offended by my perception of this incident, please don’t allow this to reflect on the website, or on any of the other writers / contributors.  As with everything I do, my statements can be backed up and confirmed and this is simply how I view this incident and Piko Interactive as a company.

**Updated:  My original wording implied that I was stating they never owned the rights to that game.  My intention was to speculate, not speak as if I had knowledge.